Most artists I know are obsessive about how they organize their tools. They always keep their tubes of paint in the same place, and brushes are always positioned in the same configuration, every time. Why? Artists don’t like to waste time rummaging around for tools, equipment or gear. 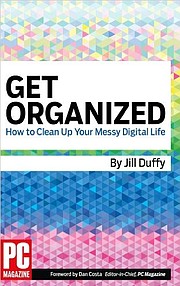 As artists, we should be as equally organized in our digital life. I recently reached out to technology writer Jill Duffy, contributing editor at PC Magazine and expert on digital organization and productivity. She’s written a book called Get Organized: How to Clean Up Your Messy Digital Life. I asked her if she’s found a mistake people commonly make when organizing their digital lives. Here’s what she had to say:

“One of the most common missteps people make when they’re trying to get organized is they want to clean up everything that’s behind them before dealing with whatever is current,” Duffy said. “Digital photos are a perfect example. When you think about your messy digital photos that are scattered across two computers, one mobile phone, Facebook, Flickr, and who knows where else, you, of course, think about the collection that already exists. You don’t think about the future photos you are going to take later today, or tomorrow.”

But cleaning up the past, she says, is hard and takes so much time. “It probably will never get done,” she said. “And then you’ll do nothing at all. A better tactic is to make a rule for how you will better organize new photos that you take from here on out. Don’t worry about the past. If ever you have the time on your hands to clean them up, great. But if you start by taking tiny steps now to label and store your new photos in a way that’s better organized for you, very quickly you’ll see the benefits add up. Time has a way of slipping by very quickly. If you start taking small steps today to make your future better, those small steps will add up just as quickly as time slips by.”

Find out more ideas Duffy has about how to digitally organize your life in my State of the Art column, in the December 2015/January 2016 issue of Professional Artist magazine, available on newsstands and online in November.